Disclaimer : The post below is not intended to show any of the jobs superior or inferior.

Now coming to the topic..As majority of my family belongs to the “White Collar” jobs,since my childhood I always had this unknown and strange disliking towards the “Blue Collar” population..My view about them was they were too bad in studies and that made them taking up this job..Those days I even had disliking towards students who don’t study well in class..I always used to wonder what is there to study after all..It is something quite easy and simple..

The above mentioned reasons were very sensible and logical then..This made an attitude in me which made me arrogant to them..

I remember,I had to take so much of effort to smile at them,same while talking to them too..The fact that these people have flunked at school keep pestering me that the disliking towards them got plotted as an exponential graph.. 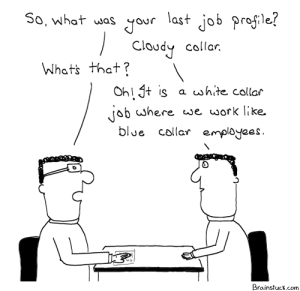 Then as years flew,I realised the truth behind them..I realised that most of the people gave up studies because of worse circumstances in their lives..

Then the sympathy towards them made me plot a graph of disliking to a straight line somewhere near to the origin of the graph.. 🙂

Later when I started to work,I became very nice,polite and compassionate towards them..I would listen to the stories of “cleaning akkas”(women who clean rest room) when I get time,I would tell them not to discourage their kids from studying etc..

I used to tell my friends circle about these conversations empathizing them,but they always used to give me discouraging “support” and killing “advises”;to which i always used to counter them..

I was advised by one of my dear ones that most of these people take advantage of our sympathy.

Then here comes the worst I could expect from them..

There was a “cleaning akka” in my project area..In our usual chit-chat she always used to mention about the her five daughters and her husband who was a tailor..Since she was staying somewhere near to my house,it was usual to meet up with her family..She was very considerate to me that once she even brought me a mug of hot water to my seat when I was coughing my soul out..

When I met her in the rest room,she was so excited to see me as if she was waiting all the while there for my arrival..All in a sudden she asked me about the plans for Diwali..I told her that I don’t celebrate Diwali.

She cried..I was clueless..I have not uttered a word other than the answer of the question she asked.. 😮 😮

Then she started off saying how much she wished to celebrate Diwali in a “great” way..So this year if I could help her by lending Rs.5000,she could fulfil her dream..

I could hear like an echo she telling me that all she is earning is Rs.4000 and if I could lend her then she will repay pay me in a year..

Anger was flowing inside my body with the speed of a jet..I could feel the that I’m biting my teeth very hard..I was sweating a bit..

I’m angry not because she asked me for money but she asked for an amount more than her salary..

After getting back in the seat i realized what my friends were actually telling me..Then I plotted a graph..you know how it will be right??? 😡