My paternal grandmother passed away on 10th January 2014.Oh no,no, this post is not a rosy picture of my relationship with her nor about her glorious past and, this post is not about the philosophies of life and death.This post is far different from what you can even guess.

I did see lot of positive and negative things during the funeral.The negatives outnumber the positives but I am not going to write about the negatives here because of two reasons : 1)The negatives won’t fit in just one blog post and 2)my Father might kick me out of the house for badmouthing about his relatives(he doesn’t follow my blog,but still this is a very bad risk.)

For the first time in my life,I became a “real” host.When my Grand Father passed away,I was too young to help my parents in anything other than controlling my Brother.In most of the other functions, which were weddings,there was nothing to do except getting dressed up in the morning,having sumptuous meal in the afternoon and dancing in the night.This time the scene was different.I had to immerse my hands in everything from sweeping the floor to settling the bills.Money is important;in fact,having cash is very important.More than liquid cash,cash works better in Kerala.Especially during an emergency such as death,having cash in our hands is a big relief.I was always against the idea of keeping cash in our hands.But,this time I realized how helpful cash could be;of course we cannot pay by card to drivers,helpers and in grocery shops.A fair amount of cash can be very helpful during emergencies.

This is the most important lesson that I learned.After the funeral,that night I didn’t think much about my Grand Mother but I thought very hard about what I saw during the day.There were a lot of times,when I have teased my Father telling that he doesn’t know how to keep up friendships.He rarely keeps in touch with his friends.But,my Father never ceases to amaze me with his life.His entire “bachelor lodge” friends gang came down and that was a big relief for my Father.They cheered him up.Most of them had taken off from their work and traveled early morning to reach our place.They joined rest of the family giving orders,making people work and settling some bills.Next day I got to know from my Mother that all my Father did was sending a text message to two of his friends in his old gang.This is when I understood the true meaning of friendship.My Father doesn’t have them in his Facebook friends list,he doesn’t talk to them daily,he doesn’t remember their birthdays,he doesn’t text/IM/Whatsapp them,but when he needed them the most they ,all, were there with him.Nobody complained or made a fuss about he sending text message to only two people.They were more than enough happy to stay with him for the entire day.That night what I thought about was how many friends do I have whom I can truly and blindly trust in my life,how many friends will actually come down to console me when I am in need,how many friends will pay off my bills even without mentioning about to me later and how many friends will  take the pain to take a day off to sit with me.After thinking for a long time,I came down to just two people and realized that those two people have been with me for more a decade.Though I had told about my Grand Mother’s demise to few of my friends,only these two people came to see me.I’m so glad that I have two people in my life to whom I can hold on when I am in deep shit.The irony is the people with whom I talk/text/chat didn’t give me even a call.Having sincere friends is a big bliss in life.Yes,this is an advice — If you don’t have trustworthy friends or relatives,work on it.They make a huge difference in your life.

My Father was in an important meeting when my Grand Mother passed away.His mobile phone was switched off and thus,he became the last one to know the news.The shock was immense as he wasn’t expecting such a news because Grand Mother had looked perfect before he left for work on Friday morning.This is the time when you need an efficient and sensible spouse.In our society,men get little time to grieve as they are expected to run around.Here things were different.My Mother made sure that my Father is free from all the strings of responsibilities and gave him the space to grieve,cry and pass the phase.It was a big thing a wife could do to a husband and vice versa. She ran around the house,made sure the things are ready for the rituals,made all of us work, and in the end everything went on well as we all helped her.She didn’t pester him for taking decisions or opinions because those weren’t the need of the hour.For the first time,we felt that we worked together like a family.My Mother told my brother and me only one thing — this is the time to support the Dad and we made sure that he has his time with his siblings and family members. Later when my Father hugged three of us,I could sense his relief and I feel as a spouse and kids,the best thing one can do to another family member is to help him/her move on during a bad phase.He did tell us to go back to work  but we stayed with him until the rituals are completed only because we didn’t want him to go through the pain alone.

Now to talk about my Grand Mother — We never got along well and we had our own fair share of disagreements and fights.But,she was a beauty with brains and an awesome Mother.I was surprised when I realized that I didn’t shed even a single tear throughout the funeral.But,on the third day when we went to collect her ashes,I did see pieces of her bones and I couldn’t help not to cry then thinking about the Iron Lady of my family.

Death!!!
It is like an uninvited guest during our lazy weekends.

But some people make appointments with death when they shatter in their lives. 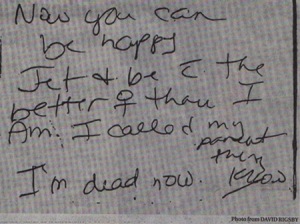 It is been 10 years that my best buddies’ bro killed himself.He hanged himself after coming back from school.
The teacher punished him in front of the class and he couldn’t bear the embarrassment.He was in 7th std then and the youngest one in the family.

Last evening while talking over the coffee with Sudheshna,Madhu and Priya,they were telling suicide stories that happened in their college.

1)She studied in the regional language till 12th std.After getting inside the college,it became difficult for her to follow the lessons in english. She tried hard to cope with the curriculum but failed terribly. One fine morning the hostel woke up hearing her demise.

2)She was a district topper in 12th and a brilliant athlete. She joined college hearing about the scary Engineering Mechanics subject. She started having sleepless night thinking about studying the subject after hearing the bitter experiences from the seniors.She too fell in the failed group and she hanged herself.

3)Beauty made her the center of attraction in the college.After carefully choosing a good guy as her boyfriend,she went on cloud nine as a celebrity in the college.When the guy left her,she couldn’t bear the embarrassment and the teasing from her friends.She wrote a letter explaining the reason and killed herself on her way back to home.

What is happening to our youngsters?Are they brought up as WEAK personalities?

Why do these young men and women give up for silly reasons?Why are they NOT taught to screw back the life/fate when their life get screwed?Where is their potential to see the life as a gifted one?

SUICIDE IS NOT A SOLUTION FOR ANYTHING.THE ULTIMATE LOSERS ARE YOU AND YOUR FAMILY.

Killing yourself is COWARDICE.It is like running away from the reality.

Have you ever thought that how you are remembered after your suicide?The world will tell that you are a LOSER.They will say “Duh!!He/she didn’t even had the guts and potential to change things in his/her life.” 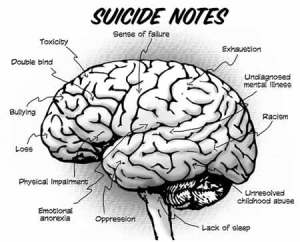 Instead if you had put in some effort,your life would have been changed.Always remember that there is NOBODY in this world who had never failed or being embarrassed or being in bad times or being shattered at some point of time in their lives.bad times will make you strong and just because something bad happened in your life doesn’t mean that your life is always bad.

OUR LIFE IS GOOD OR BAD ACCORDING TO HOW WE SEE IT AND HOW WE LIVE IT.

It is not just parents but the duty of teachers and elders to make sure that they make the kids aware about the bad times in life.Rather than hiding the financial crisis or bad times in family,it is always better to make the kids also part of the bad times.Rather than complaining about not doing well in school/college,parents or teachers can spend some time with the kids to know the reason behind their poor performance.Also,it is better to raise the kids making them hear about true stories about people who are close to you who overcame bad times in their life.Parents should make the kids feel that even when the world leave/blame them,they can always come back under the wings of the family.

Most of the suicide attempts could have stopped if they had somebody to talk it out their burden and a shoulder to cry on till they feel better.

NEVER make an impression in your kids’ mind that there is another LIFE.Teach them that there is ONLY ONE LIFE.If we lose it,then it is a loss forever.

Let them grow up knowing the value of being alive as a HUMAN BEING.